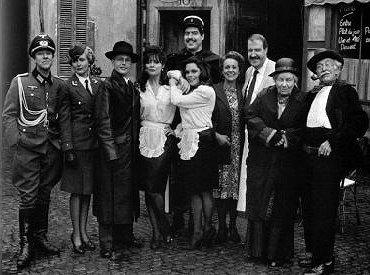 Supporting Characters are recurring characters who appeared in 5 or more episodes during the show; they may or may not be individually credited in the Episode Guide for the episodes in which they appear.


Credits for Series 1-5 were compiled by me with assistance on some spellings from other netizens and other sources. Information on Series 6-9 comes from Jerry G, myself, and Jeff Peck, and is not yet complete.

Brief Bios For Some of the Actors

Information here is gleaned from a number of sources, mostly from a series of newsletter articles in the now-defunct email-zine Vertical Hold, the Internet Movie Database, and Jeremy Lloyd's autobiography "Listen Very Carefully, I Shall Say This Only Once". Some of it has been augmented and corrected from still other sources, including original copies of other shows.

Gorden Kaye, born in Moldgreen, Huddersfield (Yorkshire) attended Huddersfield Technical College in the early 1960's and made his TV debut as Elsie Tanner's nephew in Coronation Street in 1968. He went on to minor roles in many other shows and a part in the 1977 Python-filled film "Jabberwocky" (as Sister Jessica) before joining Jeremy Lloyd and David Croft on two short series, Oh, Happy Band and Come Back, Mrs. Noah, and finally teaming with them and achieving sex symbol status through 'Allo 'Allo. His popularity and work schedule didn't interfere with later film appearances as 'Allo 'Allo continued, including appearing in Terry Gilliam's film Brazil.

His fame made him a target for the British tabloids - one of which, in 1988, discovered that he was having a homosexual affair. In response, just before they were due to publish photographic evidence, he happily admitted that he was gay, writing a personal memoir called "Rene and Me" with the help of a friendly journalist - thus robbing the scandal-mongers of their scoop. Mr. Kaye has appeared in a few episodes of the Lloyd-Croft comedy Are You Being Served?, popped up in episodes of Last of the Summer Wine and All Creatures Great and Small, and was the stalwart host of "Nationwide" in the short-lived Come Back, Mrs. Noah.

Gorden Kaye made the news in January 1990 when a windstorm-related injury nearly led to his death. While in his car during a fierce windstorm, a wooden hoarding broke through his windshield and stabbed into his head, nearly killing him instantly. After a six-hour brain operation, he went into a long but eventually successful recovery, while the tabloid press tried to sneak in and get shots of him unconscious on his bed. Jeremy Lloyd sat with him for long periods, and Gorden's agent came visiting with many videotapes of 'Allo 'Allo, which Jeremy thinks may have helped remind him who he was. Afterwards, Gorden suggested that 'Allo 'Allo should end, but Jeremy Lloyd convinced him otherwise, and the show continued for another two series. Despite his miraculous recovery, Gorden still has no memory of the accident.

Since the end of 'Allo 'Allo, Mr Kaye has gone on to appear with Carmen Silvera (his long-suffering wife Edith in 'Allo 'Allo) in the 1996 film "La Passione," and on stage starring in Harvey, with Rue McClanahan.


was born in Toronto and raised in England. She left for Montreal during the war, where she trained in ballet and worked in three Ballet Russe productions. Later, she studied drama - and in the 1960s won national prominence as Camilla Hope in the BBC serial Compact. Her other roles include appearances in TV series Dad's Army, New Scotland Yard, Two Women, Whoops Apocalypse, and Within These Walls, as well as playing Miss Marple in a stage version of "Murder at the Vicarage". She has appeared twice in Doctor Who, notably as Clara the Clown in the adventure The Celestial Toymaker. She later appeared with Gorden Kaye in the cast of the film "La Passione." In 1990, she was paid the great honour of being the subject of This Is Your Life!

In August 2002, Carmen Silvera succumbed to lung cancer and passed away.
Obituary at Ananova
Obituary at dadsarmy.tv

was 32 years old when 'Allo 'Allo began, having previously played small roles in Minder, The Kenny Everett Show, The Professionals and The Two Ronnies, in which she played a Cockney newsboy. She also has appeared in Are You Being Served? and had a key role in the shortlived Lloyd/Croft collaboration Come Back, Mrs. Noah, playing the space commander's assistant. She's been seen most recently on stage in a Newcastle production of Dracula (Nov '96). You can visit the Official Vicki Michelle Web Site for more pictures, articles, and information about what Vicki is doing these days. You can also read an interview with Vicki originally conducted by a British magazine.

left after the third series of 'Allo 'Allo to join the cast of Howard's Way. She also appeared in the film "Biggles: Adventures in Time" (1986) and the 1983 TV Movie "The Hound of the Baskervilles."

appeared in a number of films prior to her regular role as Fanny in 'Allo 'Allo. Most famously, she was in the second Pink Panther film, "A Shot In The Dark", as well as in the TV Movie version of "Nicholas Nickleby" in 1981.

was born in Sussex and trained at the Webber Douglas Academy. Mainly a stage actress, Kirtsen's television credits include "A Dave Allen Christmas Special", "Woolcott", "Rings on their Fingers", "Dawson Watch", and "The Upper Hand". She has now gone on to play the role of "Molly" in the series "Down To Earth." Kirsten is married, with four children, and lives in West London.

was born in St Petersburg, and is fluent in Russian, English, French and German. One of his early stage roles - as Dracula - is still regarded by some as the definitive interpretation of the role. His films include The Boys from Brazil, The Spy Who Came In From The Cold, The African Queen, and the Swiss film Four in a Jeep, in which he did all the Russian dialogue. Also look for him in the television movie "The Birth of the Beatles", as the Club Boss. Recent work includes guest shots in Lovejoy(1994) and the movie "The Sum of All Fears" (as the Russian President).

was born in Manhattan, educated in England and trained for the stage at the Webber Douglas Academy in London, where in a career of some 20 years he has become well known both in theater and television. He made his London debut in the original West End production of Cowardy Custard. Other London theater includes Nickleby & Me; Blithe Spirit; The Frogs; Off the Peg; The Biograph Girl; and Don't Dress for Dinner.

In films, Guy has appeared in The Disappearance of Kevin Johnson; Great Harry & Jane; Lost Highway; Leprechaun IV; Playing God; and Big City Blues. You can even have Guy talking to you in your own home by going out and purchasing the computer game "TIE Fighter" from Lucasarts: when you play the game, Guy's the voice of your commanding officer! Guy now lives in Los Angeles, where he juggles two careers - actor and writer.

has has appeared in many television comedies besides his three-series turn in 'Allo 'Allo. He left the show to join another British sitcom, "We'll Think of Something", in 1986 (though he returned for a guest shot, reprising his role as Hans Geering, during series 7). He has also appeared in the TV series "Porridge", "Haggard" and the recent miniseries "Martin Chuzzlewit", as well as the film "Blue Ice." He also worked with another AA star, Kenneth Connor, in the films Carry On Dick and Carry On Behind in 1974-5.

Kim started her career as an assistant stage manager at the Belgrade Theater in Coventry, where she first met author and producer David Croft. After graduating from the Webber Douglas Academy, she worked in a variety of theaters around the country, and has worked in Kuala Lumpur, Hong Kong, Germany, Holland, and the USA.

In 1990, Quinton Arts (the production company formed by herself and her husband John Nolan) mounted a successful production of Aladdin, starring Kim and two other 'Allo 'Allo actors: Sue Hodge and Arthur Bostrom.

Kim lives in Cotswold with her husband, her children Tom and Miranda, two Springer spaniels and two cats.

began his acting career at age 16 and before leaving school, he had played Apollo in the BBC serial Tom Brown's Schooldays. Later, he co-starred in The Coral Island, The Gates of Eden, The Children of the New Forest and as the title character of Park Ranger. Known as the cast's practical joker, in real life he is nearly the opposite of the straight-laced Herr Flick; it appears probable that Gibson orchestrated the mass appearance of much of the 'Allo 'Allo cast in the crowd scenes for an episode of EastEnders. Since leaving the show, he has appeared in the television miniseries "Trade Winds."


After co-starring in 16 of the 25 "Carry On" films (including the first, Carry On Sergeant), Kenneth was no stranger to vulgar suggestiveness. He also appeared in more sophisticated comedies, such as the Beatles' A Hard Day's Night, The Magic Christian, and Cuckoo Patrol and other popular television series like "Hi-de-Hi", "Blackadder the Third", "You Rang M'Lord", "On The House" and "The Memoirs of Sherlock Holmes." He passed away a year after the final episode of 'Allo 'Allo.

Born in Rugby, Warwickshire, Bostrom is the holder of a BA (Hons) degree from Durham University, and appeared in the world premiere of Ray Cooney's hit farce Run For Your Wife in Guildford, UK, and was recently on stage at the New Theater in a 1995 production The Wizard of Oz.

His television credits include the Croft comedy "Hi De Hi", The Crystal Cube, Just Good Friends, Fothergill, and the role of George Bartlett in "Miss Marple- the Body in the Library". Mr. Bostrom also maintains his own web site, complete with a biography and photos.

Before replacing Sam Kelly in 'Allo 'Allo, Richards played Lucius in a televised version of "Titus Andronicus", and directed and starred in Dario Fo's "Accidental Death of an Anarchist", for his own Belt and Braces Roadshow Company.

For the past 15 years, 4'9" Sue Hodge's credits have included musicals (among them Jesus Christ Superstar and The Rocky Horror Show), cabarets, straight plays and several recordings. Like Gorden Kaye, she appeared in the Terry Gilliam film "Brazil" - as a 'Force of Darkness'.

After a recurring role as Miss Thorpe in the Lloyd/Croft comedy Are You Being Served?, she appeared as the receptionist in the famous film farce "The Strange Case of the End of Civilisation As We Know It" before returning to work with Lloyd and Croft on their new series, 'Allo 'Allo.

Along with his recurring role as General Von Flockenstuffen in 'Allo 'Allo, Morley plays "Reg Holdsworth" in the popular series "Coronation Street."

Many thanks to all the wonderful folks, both here in the U.S. and overseas, who helped with information, corrections, distribution, and more for this guide: Return to the 'Allo 'Allo Home Page If you have any questions, comments, or additions you'd like to see on this page or on the 'Allo 'Allo Web Site as a whole, email me here at marktv.org
Site visits are counted by